”Mihai Viteazul” National Intelligence Academy organized during October 26 – 27, 2017, the 23rd edition of the international conference Intelligence in the Knowledge Society, under the patronage of the Romanian Intelligence Service. More than 180 participants from 23 countries attended the event, which took place in the Central University Library ”Carol Ist”, founded in 1891 by the first Romanian king, Carol Hohenzollern-Sigmaringen.

Setting off once again from the necessity to closely look at the relation between theory and practice, the event hosted academics, practitioners, researcher and students in the field of intelligence and security studies, which are national and international representatives of the academic environment, as well as of the international intelligence community. Through their presence, we have recreated the international interdisciplinary communication platform, a yearly desideratum of our event. We believe that such reunions represent sources of inspiration and knowledge, as well as an opportunity for the participants to stay connected to the innovations, developments and knowledge and understanding paradigms of the global security diagram.

This edition’s topics covered several areas of interest seen from different perspectives and were structured around five debate pillars: Small States and Security Dilemmas: A look into the future, Enforcing Efficiency and Effectiveness in the 2020s Intelligence Organization, Privacy and Security Debate in Intelligence, History of Intelligence: Days of the Future Past and Data and Intelligence Analysis. Differences and Continuities. The scientific committee, in the process of building the thematic, aimed to widen the conference’s reach, at home and abroad, by offering the chance of participation, as lecturer or auditorium, to a significant number of persons, defined by the common interest for the intelligence and security studies.

”Mihai Viteazul” National Intelligence Academy had the honor to have as special guests personalities with internationally renowned academic and professional profiles in the fields the conference focuses on. We hosted the coordinator of the intelligence studies section of ISA (International Studies Association), Prof. Dr. Stephen Marrin, the president of the European chapter of IAFIE (International Association for Intelligence Education), Prof. Dr. Bob de Graaff, as well as the head of the EU INTCEN (European Union Intelligence Analysis Center) OSINT Department, Mr. Petros Mavromichalis.

Following the thematic of the conference, as well as the participants’ interest for such instruments, during the event the book Analyst’s Guide to Indicators, by Mr. Randolph H. Pherson and Mr. John Pyrik, was launched.

Mr. Randolph H. Pherson is author, co-author and editor of a series of works in the intelligence field, such as Critical Thinking for Strategic Intelligence and Structured Analytic Techniques for Intelligence Analysis.

The 23rd edition of the international conference Intelligence in the Knowledge Society represented a good opportunity to reaffirm the principle of intelligence being a valuable asset. Its value is exactly the reason why it should be understood properly, handled and approached with creative care. The conclusions of the conference revealed once again that this responsibility belongs to the intelligence studies, which gather under the umbrella both academic knowledge and the best practices in the field. 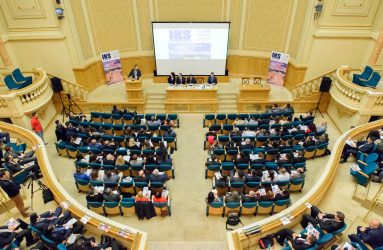 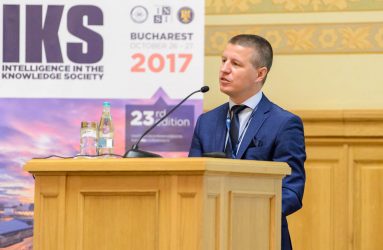 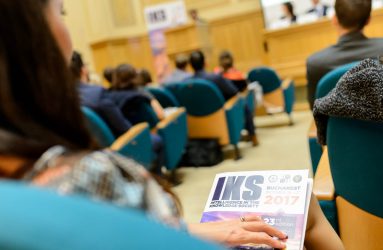 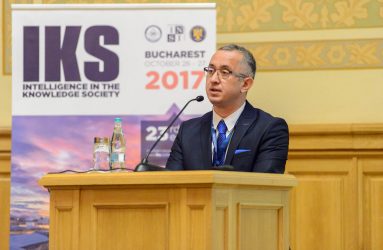 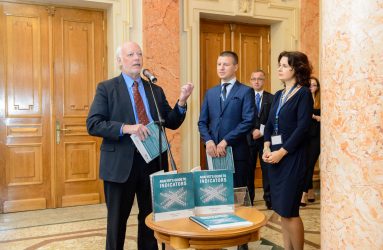 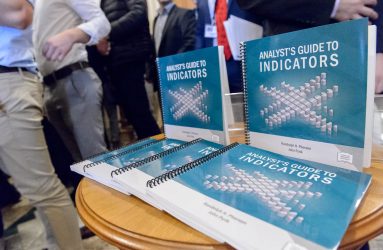